If you haven’t poked around the Technology, Entertainment and Design (TED) website, you’re missing out on a veritable treasure trove of forward thinking ideas. The TED Conference is where people from every industry and mindset converge to inspire conversation about how to change the world. These taped speeches, which can be found for free on the TED website, range from fixing the environment to business matters, including public relations. Here are five TED talks that may inspire you to revise your PR tactics. 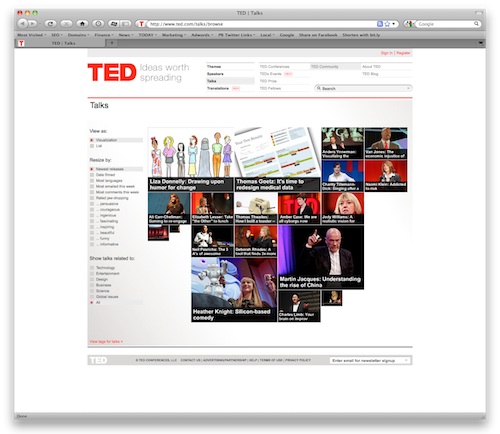 While social media sites like Twitter and Facebook might open people to the rest of the world, studies have shown users tend to flock to what they know. This is just like the outside world; when moving to a new place, people will find what’s familiar to them and often simply stick to that.

Blogger and technologist Ethan Zuckerman argues that this needs to change with his speech Listening to Global Voices. Because of the wide access to the world and the ability to translate webpages, he says there is no need to limit yourself to your comfort zone. He also gives some strategies to widen your social media accounts to users in other countries, especially Twitter.

2. Be Bizarre, Not Boring

So many products fly under consumers’ radar not because they’re terrible, but because they just don’t stand out. It seems like every day this becomes truer considering how many items appear on store shelves and online businesses all the time.

Author and entrepreneur Seth Godin describes in his Be Bizarre, Not Boring speech how to make your product stand out from the rest. He argues everything has its audience, and finding early adopters for your product can be the best way to go. If you get people talking about how great your product or idea is and create a ground-level buzz, it may truly take off.

3. What Adults Can Learn From Kids

What better way to learn how to think like a kid than to hear it straight from a child’s mouth? Adora Svitak is a young prodigy who has gained notoriety as a tiny literary genius. She’s also a public speaker and activist who campaigns for literacy and human rights campaigns.

Thus, her speech What Adults Can Learn from Kids is surprisingly informative and professional. She delves into how business owners can learn more than they think from kids, including new ways to problem-solve and innovate. If you’ve felt your tactics and dreams have suffered as of late, try going small instead of big!

4. How To Start a Movement

Easily the silliest video on this list, Derek Sivers’ How to Start a Movement speech is nonetheless very enlightening. With footage of two kids dancing at a gathering, he shows how a simple idea can spread if there’s enough gusto and motivation. While he talks, keep your eye on the video; everything he says is accentuated by the craziness that occurs behind him. If you’ve ever wondered how to inspire the public to join your cause, check out this seemingly irreverent video for ideas.

5. Life Lessons From An Ad Man

Instead of just looking forward, try a little look back. Rory Sutherland has been in the ad game for a long time, and there is much to be learned. His speech Life Lessons From An Ad Man shows that no matter how far your eyes are set on the future, you should at least sneak a glance into the past.

Rory’s main point is when selling a product, your marketing and PR should push a change in perception, not the product itself. This way, consumers see how it affects their life and not just their bookshelf or kitchen table. Check it out to learn how. Also, you may just learn more about Prussian potatoes then you ever wanted!