What’s your PR “Jumping Off Point?”

Every journey begins with a single step. It’s best to start at the beginning. Every rose has its thorn. 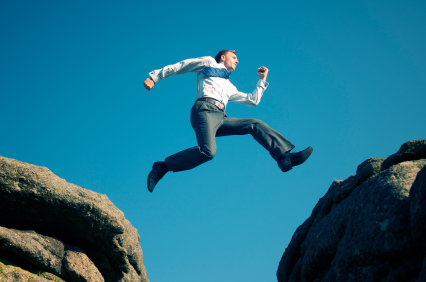 Ok, the last one didn’t work, but there a bunch of platitudes about the beginnings of a journey or quest. Your PR campaign is no different. No matter what your goal is, there’s one aspect of the campaign that’s your “jumping off point.”

In other words, one piece of your PR puzzle is the first one you put down on the table. It’s the one that the other pieces of the puzzle revolve around and you use to gain traction. Strangely, it may not be what you think it is, either.

When assigning a faction of your campaign as your “jumping off point,” it may be best to ask yourself, “What is our point?” That is, what’s the point of your entire campaign? Is it to sell product? Increase exposure? Change the world? Keep the world the same?

Your jumping off point will often reflect the campaign at large. In public relations, everything is about the message. If part of your message is in contrast to the rest, it can confuse and irritate customers and/or the public.

For example, say your campaign is one to try to educate kids on the benefits of getting out of the house and getting exercise. If your “jumping off” point is to come with a great “outdoor simulator” app for their computers, therefore keeping them inside, you’re sending mixed messages.

Another big consideration for your jumping off point is the medium you’re using to spread your message. While you may expand later, you want your initial campaign to get to the widest audience possible. After your initial success, you can reach and find new markets that might take notice after you’ve made your first splash.

Using the above example, you may think putting your message outdoors might be a great way to start. However, if the kids you’re trying to reach need to be enticed outside, you’re preaching to the choir. The kids seeing that message would just say “no duh” and go back to playing kickball.

So although the free app idea wouldn’t work, getting your message online or on TV might work best. A press release might work … for their parents. Kids won’t care less about an article in the newspaper. You have to make it work for the audience you want. Most kids are computer wizards, so that could be your jumping off point for the entire campaign.

Later, you may think about expanding to press releases to get parents involved or stick some billboards around parks to remind kids to keep having fun. But in the beginning it’s all about that initial audience.

What’s your campaign’s jumping off point?