Social media is funny – sometimes it’s deadly serious, and sometimes it just seems like a large scale game. But even when it’s at its most intense, social media is still like a game – chess, that is. Each part of your campaign adds up to a complete set of pieces, all of which together can bring you success on the board and on the web. 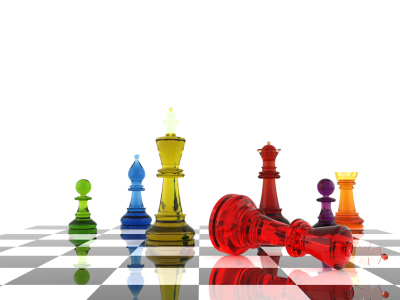 One blog does not a company make. Two blogs do not a company make. But what about 15? 30? 50? Like pawns, your little blogs don’t have much power by themselves. But when you combine them with other pieces, they can be very powerful. Even a wave of pawns by themselves can be dangerous – it’s all in how you use them. Eventually they stack up and it’s tough to not take notice.

A knight moves unexpectedly, in funny little L shapes that can confuse and baffle your opponent. The game can go along as planned when suddenly they’re trapped, having forgotten all about the knights! You want to surprise your customers with your social media campaign, not bore them into complacency. Your creativity, either artistic or in the business sense, could be what puts you over the edge and gets you noticed.

Sometimes campaigns use a lot of Twitter. Sometimes they use Facebook more. Some campaigns are very successful with LinkedIn or even Youtube. But whatever you use, make it work for you. Get your message across using the service that works for your campaign. Don’t try to make a rook move diagonally, or vice versa.

The queen piece is the most powerful on the board, hands down. She’s able to go absolutely anywhere in a straight line and can take out any piece in an instant. What’s like her in your campaign? Research – at least concerning where your customers are. The best campaigns know how to go where the customers are and involve them directly instead of the other way around.

So what’s the true “King” of your social media chess board? What, if captured by the opponents, would completely destroy your campaign? It’s the message. If you don’t have a solid message, or worse don’t really have one, you have no chance in making it in the world of social media.

On the chess board, the king piece can only move so far, and has very limited attacking ability. Similarly, once you’ve figured out your message, you have to protect it vigorously and be careful not to let it stray too far. Otherwise you may find it stranded somewhere and suddenly your business is in checkmate!

Great analogy. The social media “game” can be confusing and challenging, but you feel a sense of accomplishment once you master it. The most important thing is to be playing the game in the right places. You want to be using the networks that your target audience is using.

I liked the way you have compared social media to chess. Good post! In social media you cannot expect the results to turn out in your favor in a single day. By constantly producing unique, quality and relevant articles, you will be able to generate more traffic and eventually gain success. You have to make your blog very impressive with a good title, adding photos and making it easily accessible to the viewers. In social media Content is the king!