Have you heard of the “nuclear option?” It’s whatever option is available to you that you hope will blow up like crazy, but you want to save until a last resort. In other words, you have a tactic you know will work on a large scale, but may have other consequences; hence your hesitation to actually use it.

In politics nuclear options usually involve directly attacking your opponent on sensitive subjects. The idea is to polarize voters and bring them over to your side – but the consequences may mean losing everyone when the facts come out, or simply have the public see you as too negative. Nuclear options are very risky. 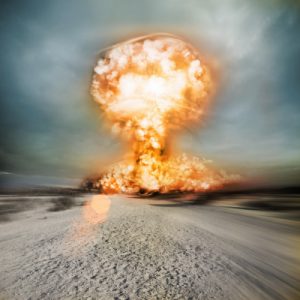 However, it’s important to keep such tactics in your back pocket when considering your social media campaigns. It may be incredibly risky to use them, but nuclear options can be useful in several ways.

Knowing and planning what your nuclear option is may give you a better idea of what your focus should be. If you have something in mind you know will work but may potentially threaten allegiances in the future, scale it back a bit to find a solid middle ground.

For example, say you take advice from politicians and conceive a plan to attack your competition in town. You know what the weakness of their product is and why yours works better and know how to prove it to everyone, but as a nuclear option it’s a little risky considering you may ostracize yourself in the community.

Try scaling it back a bit, then. If you know the weaknesses of others’ products, focus your campaign on how your product is so much better, especially on that one point. Don’t attack – build up. Say how your product will change your customers’ lives.

Instead of ostracizing, you’re just taking advantage of an empty niche hole. By finding your end game “last resort,” you can realize what the rest of your campaign should be about.

Doesn’t Have to Be Negative

Nuclear options do have a negative connotation to them, and it is basically in the definition that there need to be potential consequences. However, is there a nuclear option for your company that minimizes the risk?

Usually where the negative vibes come from is being negative. You know attacking your competition will hurt their reputation (or yours), so it’s a negative action to take. If you want to buck the trend, try to think of something positive to do instead.

At the very least, you can minimize potential consequences by trying to think of how to reach the maximum amount of people using the broadest terms possible. A “nuclear option” that strives to be as positive as possible could just end up being your main campaign!

Have you ever considered a last ditch effort like this?