Finding the Best Way to Say “Oops, Our Bad”

Apologizing is never an easy thing to do. Even if it comes quickly to you, being humble and accepting blame is still a tough thing to swallow. After all, you have to admit that what you did was not only the wrong thing to do but so wrong it hurt someone physically, mentally, or spiritually. When you think about it, apologizing is pretty deep. 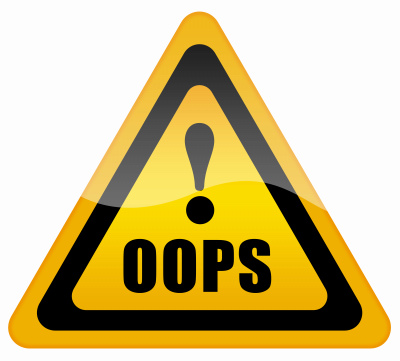 So it’s not all that surprising when companies completely botch the job. They’ll make a mistake and either think saying sorry is beneath them or do a terrible job of saying it. Sometimes they’ll even go way too overboard and come off as insincere and cause even more problems for themselves.

Keep the Error in Perspective

It’s easy to make things look worse than they really do – mountains out of molehills, as it were. If you make a small goof and start a giant campaign to tell everyone how sorry you were, you could make the original goof much bigger than it already was.

Let’s say for example your product breaks and causes your customer to have a bad day. There’s a pretty bad problem, but nothing you can’t fix. It’s simple enough to apologize to the customer, offer a refund or other restitution, and do anything else to make them feel satisfied.

However, if you turn this isolated incident into a global affair by taking an ad out in papers everywhere announcing your apology, you’re going overboard. It will likely have the opposite effect – people will think something’s up, like you’re hiding the fact ALL your products are potentially dangerous.

When a customer, business partner, or someone else has been wronged, you never know what’s going to finally make up for your transgression. It’s easy to assume what you’ve done can be made up by offering free items or a discount, but not everyone wants that, nor should you expect them to. So it’s important to have options.

For instance, instead of offering them a free item, how about donating to a charity of their choice? Ask them what they think will help them get through the issue they’re having and allow them to move on and be friends again. Sometimes they’ll ask for a lot, but you have to be willing to work with them. Of course keep the above point in mind as some customers will ask for a little more than they should.

The most important thing about apologizing is that it’s looking to the future. You’re saying “Look, we goofed and want to make up for it. Let’s get started.” As soon as you start looking back to the past, you’re defeating the purpose of the whole apology.

So after you apologize once, don’t feel like you have to keep going back there. If the customer still feels slighted, find out how to move forward – what will make them feel better about moving on? If you find they keep dragging you back to the slight over and over, it may be time to move on yourself and let them cope with it in their own time. There’s only so much you can do!

What’s the most awkward thing you’ve had to apologize for?