Is Your Client an Idiot?

Home » PR Fuel » Is Your Client an Idiot? 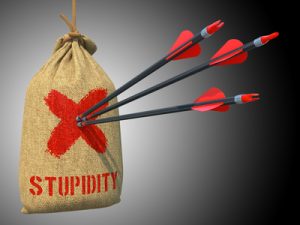 I don’t know if the heat is getting to people or what, but lately I’ve been hearing some horror stories from PR people about their clients. In every case I’ve analyzed the PR person has been right and the client has been woefully wrong. Unfortunately this doesn’t mean anything. The PR person or firm has to make the client happy, not the other way around. And despite the fact that corporate spending is beginning to return, the economic environment is such that most PR firms are going to have to grin and bear it – for now.

The PR firm-client relationship is an awkward one. The client relies on the PR firm to get its message out and the PR firm has to rely on the media to accomplish that. The pressure to perform is enormous, but the ability to quantify results is usually difficult. The client is, seemingly, never happy.

In today’s column, I’ll examine a recent case of client unhappiness that I’ve been informed of and let you know the advice I’ve offered to the PR people involved. As always, the names of the innocent – and guilty – will remain a mystery.

A PR firm convinces a local television station’s news department to do a segment on its client. Everything goes off perfectly: people are interviewed, research is provided to the news producer and the client is oh so happy knowing that it will be featured on the eleven o’clock news. And then the unthinkable happens – the segment never runs.

It’s important to understand that news is fluid – and your client needs to understand that as well. Every week there are thousands of television segments filmed and articles written that don’t air or aren’t published as scheduled. Some of these will never air or be published, but most will find their way to the public at some point. It may just take a slow news day to get them there. Unfortunately, it’s beyond your control to decide what gets aired or printed.

The news cycle changes moment-by-moment and that means articles are spiked and segments are shelved. I’ve written 1,000-word stories that have never seen the light of day because big news broke, I got a scoop or, believe it or not, a more interesting story fell into my lap. If I have to spike my story, I call the subject and PR person to let them know.

In the real-life case here, however, the news producer acted very unprofessional – not returning calls or emails and not providing an explanation why the piece didn’t air. This infuriated the PR person who had no recourse but to tell the client, “I don’t know why it’s not being aired.”

I suggested that the PR person not go over the producer’s head and contact the news director. Moves like this rarely solve the problem and usually cause more problems. I explained that the segment would probably air eventually and antagonizing the producer wouldn’t solve the problem and could hurt future prospects of working together. Dealing with the client is another story though.

It may not be the excuse the client wants to hear, but it’s the only valid one: It’s not in your control. Write it off and move on.

The client needs to understand that beyond a hostile takeover of the television station that involves hijacking the airwaves, there’s nothing further you can do to get the segment aired. You’ve done your job and now it’s time for the producer to do his job. The news cycle will come around to the point that the piece will probably air, you just have to bide your time.

In my mind, the client in this case displayed an amazing amount of ignorance when it comes to how the media works. So many people hire PR firms with massive expectations. They think their story is so amazing that the networks will be clamoring to get them on the air and The New York Times will be calling every five minutes to request an interview. If only it was that easy and let me tell you what, from a journalist’s point of view, if only all of your clients stories were so compelling.

From the very beginning of the relationship, the client needs to be told what they can expect and when they can expect it. When they push, push back and explain that while you’ve yet to master the concept of mind control.

This is an issue that comes up so often. Clients sometimes think paying a PR firm means they are guaranteed press clips. We all know it’s that not that easy. Be upfront and honest from the start and when a situation like this comes up, stand up tall and explain to them that harping on one incident does no one any good.

One piece of advice I offered in this case was for the PR firm to take the story to the television station’s competitor. Call a producer at a cross-town competitor and explain what happened to the first piece. The media is savage when it comes to competing. I’ve written stories that I would have never considered simply because I knew a competitor was working on the same story. Use this to your advantage.

And when your client starts complaining about things out of control, forward them this column.

Ben Silverman was previously a business news columnist for The New York Post and the founder/publisher of DotcomScoop.com.. Download your free copy of 7 Cheap PR Tactics for Success in Any Economy here: https://www.ereleases.com/free-offer/cheap-pr-tactics/