You’ve been tasked to write up your first press release. You’ve seen plenty of them over the years and even done some in school but this is your first time writing a press release as a professional. As a result, you want to make sure you do it right the first time and knock it out of the park. 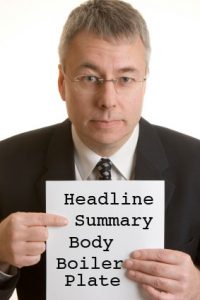 Like many first time press releases writers you may not know whether to just write the press release or outline it first. When I first started out I hated outlining; now, though, I’ve seen the light. It’s a great way to get your thoughts in order and let you weed out problems before they actually occur.

Here are some tips to help you get your framework down before you actually commit to the piece at hand.

Outlining the title isn’t really possible, but it is vital to getting your press release noticed. Try to make your title as tight, concise, and informative as possible. You want people to glance at it and immediately want to read the rest of the release.

But there’s still the rest of the press release to worry about. Again if it’s not amazing, reporters, editors, and the public won’t care about it. First up is your opening sentence. Just like the title, it should be very informative and concise. However, it should also explain the title and give an idea why readers should care.

After the opening sentence, though, you have your first real meaty paragraph. Press releases operate on the “inverted pyramid” model as in all the important stuff goes up top and everything else is for the bottom of the release. So your second paragraph should be full of the who, what, where, when, and why of your story.

Now here’s where you have to put in even more work. You have to ask yourself: do I have enough content for two more paragraphs? Three more? Keep in mind the longer your press release is the less likely it is some readers will check it out. If it’s way too long a reporter won’t give it the time of day. And if it’s full of nonsense there’s no reason to even send it in.

But you also don’t want it super short. This makes it seem like you don’t even have a story. So the next couple of paragraphs are vital to maintain your readers’ attention. Make sure you’re still adhering to the inverted pyramid in that if you have any essential info it should go in your second paragraph.

After that, though, think of anything else you might want to include. Do you have a spectacular quote from someone, or some stats to back up your point? How about factoids that wouldn’t fit anywhere else, like the fact your company won multiple awards for the product line you’re announcing?

You want to end with a bang, as well, not a whimper. If you have a strong press release but it ends up fizzling out with a weak sentence or two, that’s all many will remember. Don’t feel like you have to close out with a “summary” sentence either – as long as you conclude with another impactful sentence that gives even more information to the reader you should be fine.

What’s the toughest part of writing a press release?