Coke is Killing the Press Release. Should You do the Same?

Home » PR Fuel » Coke is Killing the Press Release. Should You do the Same?

For years, people have been proclaiming the death of the press release, yet thousands of press releases still get sent out every single day. But when Coca-Cola announced that it was on a mission to “kill the press release,” people started to take notice, and some questioned whether they should follow suit. 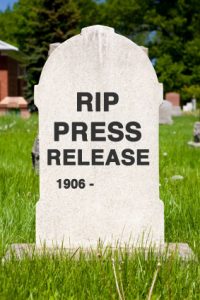 Before we try to answer the question of whether or not your company should kill the press release too, let’s take a closer look at what Coca-Cola is really doing.

Essentially, Coca-Cola turned its website into a digital magazine. Its aspiring brand journalism project, Coca-Cola Journey, is a digital magazine the company uses to tell its own story. The magazine covers everything from company news to recipes using coke to music and so much more. It’s a content-generating machine that has created a massively successful destination website where people can read stories they actually care about.

Because Coca-Cola Journey has been so successful, the company has been able to cut back on the number of press releases it sends out by 50%. By 2015, they plan to stop sending out press releases altogether. They’ve created their own platform for telling their stories, and soon, they hope to no longer have to spend their time reaching out to the media to get their story in front of their audience.

There’s a lot you can learn from Coca-Cola’s ambitious project. The most important lesson is that having your own channel for distributing your news and stories has become essential for getting your message read and shared by your audience.

It’s no longer enough to issue bland, stale press releases. You have to start thinking like a journalist. You have to become a storyteller, and you have to learn how to tell stories in ways that captivate your audience. One of the ways Coca-Cola does this is by monitoring their analytics to see what their audience really cares about. For example, they discovered that one of their recipes for Coca-Cola cake got a ton of traffic. So they created more recipes to appeal to their audience’s interests.

Why You Still Need the Press Release

Will Coca-Cola really stop sending out press releases? Maybe so. But that doesn’t mean you should do the same.

The fact is that your company is NOT Coca-Cola. You don’t have hundreds of millions of dollars to pump into advertising and marketing. Yes, you can leverage your blog and website to get your message out there, but you probably won’t be able to count solely on that for spreading your stories as far as possible.

Press release distribution is still one of the most effective ways for the average business to get its story told to the widest audience. I see businesses of all sizes getting their stories in front of audiences they would have never been able to reach on their own thanks to press releases.

What do you think? Am I right to say that companies shouldn’t kill the press release? Share your thoughts by commenting below.