Why You Shouldn’t Say ‘No Comment’ to the Media

The media can prove a great outlet for free press for your small business, as you have probably come to realize from reading this blog. A well written, well targeted press release can get you the publicity you require to get eyes to turn your direction and get your products moving. However, when something goes wrong in your company (or because of your company), you can also count on the media turning into your worst enemy. Why? Because it’s their job to report the news. And everyone knows the public loves to feed on the negative! 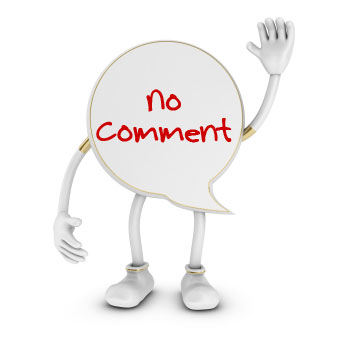 So what happens when things turn south and the media is knocking on your door, asking those hard questions for which you may not have a good answer? In many cases, the unprepared figures they have Constitutional rights and they can reply with the old “no comment.” Well, yes you do have that right, but it’s ill-advised to exercise it.

See, when you respond in this way, everyone assumes you mean something else. In other words, “no comment” is a lame attempt at a cover up. Here are a few things they are actually hearing in their heads instead of your reply:

What to Do Instead of Avoiding the Answer

So we know you shouldn’t avoid commenting, but that leaves you trying to figure out what to say. While there is no one-size-fits-all response, here are a couple pointers to help you.

Have you ever been hit with a tough question from the media that you didn’t want to answer? Did you say “no comment?” Or did you respond differently? How did it work out for you?

A very well-written article. In most cases, when we hear a NO-COMMENT answer we tend to think that somebody has something to hide. However, when being caught off guard, the fear of saying something wrong and trashing your(company’s) reputation is overwhelming. So, I guess when being in contact with the media, you really need to know how to handle the situation and be as honest and transparent as possible. In cases of uncertainty, media tends to exaggerate or invent facts, so I guess it is better to say what you have to say than leaving room for interpretation.

I have written my own article on NO-COMMENT answer from a PR perspective, and I would really use your comments and opinions on it http://ethicalblabbing.wordpress.com/2012/10/27/no-comment/