Newbie or old pro – nobody is safe from making the occasional blunder. And this happens all the time on press releases. There are so many elements and so many things could go wrong that even the best in the business slip up and make goofy errors. 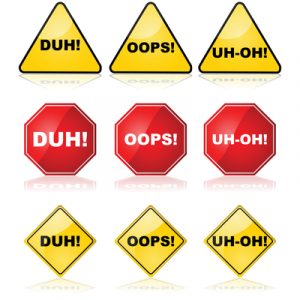 Here are five blunders that even the smartest companies and PR pros make – the same five you’re probably making with your own press releases!

We spend so much time on the body of the press release, getting the word count down, fine-tuning the language, making the first sentence intriguing enough that readers keep going. But in return we forget that if the title isn’t amazing nobody will read the body.

Your ideal title will be as concise, enlightening, and interesting as possible. If it’s confusing or boring, nobody will care about the rest of the release. The PR world is riddled with the corpses of amazing releases with awful titles.

When writing a blog or social media post you probably use more direct, personal language. You might even write like this sentence here and speak directly to your audience. This helps build a one-on-one relationship with your audience and customers. However, a press release has to be formal and impersonal. While you’re allowed some freedom, most releases look and sound remarkably similar. Deviating from that too much can get you ignored.

You can spend all day and night writing the best press release in the world. You can then run through and edit it where it looks even better. However, if you don’t edit it enough, you could be missing your opportunity to get in the paper or magazine you send it to.

Take the extra time to go through the release again. Hand it off to another pair of eyes so they can find mistakes you’re missing. Guaranteed there’s something there you’re skipping over because you’re “too close” to it.

4. Trying to Do Too Much

What’s the focus of your press release? Are you announcing the new product you’re releasing or the new office that just opened up? Ideally the press release should focus on one thing or the other. Doing too much will only confuse the reader – are they supposed to pay attention to the product or the office? Concentrate on one thing at a time to cut down on this confusion.

5. Sending it to the Wrong People

Sure, it would be great if the entire world read your press release. You would then get zillions of new fans and customers from all over would buy your stuff. But sending your press release to anyone and everyone could be a bad idea.

Let’s say your lawn mower company is announcing a new line of mowers. You’ve sent the press release to all the home & garden magazines, but now you also send them to entertainment releases “just in case.” All of them reject you because this is not a story their readers will care about. What happens in the future if you have a press release that actually pertains to those magazines? They’ll remember you sending them nonsense and could reject you before ever reading the new release.

What’s the biggest press release blunder you’ve ever made?