3 Major Mistakes to Avoid with Your Press Conference

Recently, Sony held a much hyped press conference to reveal the company’s new PS4 gaming console. People were looking forward to this event for days, expecting to get a first glimpse at the console Sony has been working on for years. And for the most part, everyone was disappointed.

What took place was a two-hour event in which Sony never showed the actual console, released any product specs, or gave out any pricing information. Instead, Sony did a lot of talking about the console and showed some videos, but the product reveal that everyone was waiting for just didn’t happen. Reporters complained about how the event was a waste of time and eager gaming fans felt disappointed and duped. 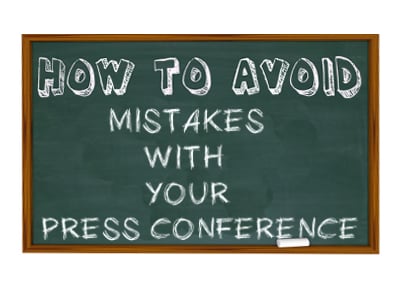 Clearly, there are many lessons to be taken from Sony’s failed press conference and a host of other companies’ failed events. It all comes down to avoiding these 3 major mistakes:

Mistake #1: Building hype and not delivering

Sony did a great job of building hype for their event. In the days leading up to it, the internet was buzzing with anticipation for the reveal of the PS4 that everyone has been waiting months and even years to see.

What isn’t good is when you fail to live up to the hype.

Sony built up a bunch of hype for their big announcement, and they failed to deliver on the one thing people expected—showing the actual product.

If you’re going to get people pumped up for your press conference, you’d better make sure you have something great to deliver.

It’s hard to keep an audience engaged. With the average attention span being around 20 minutes, it’s clear that you need to keep your presentations short and to the point.

Sony failed at this, hosting a lackluster event that not only failed to meet people’s expectations but that also went on for more than 2 hours.

Keep your press events focused on your key message. The longer you go on, the harder it will be to keep everyone’s attention and interest.

No one wants to attend a press conference to hear news that has already been broken. Reporters attend these events so that they have a chance to be on the cutting edge of a breaking story. If you’ve already sent out a press release announcing the story, there’s no need to hold a press conference where you announce the same thing all over again.

That’s why it’s important that you make sure to prevent any leaks before your press conference. Keep everything under wraps so that your event really is interesting and a big deal.

What are some other press conference mistakes companies need to avoid? Share your thoughts below.