Most PR pros have a grandiose idea of what public relations is before they go into the field. They see representation of it on TV or a movie and believe that the job is all glamour and hobnobbing with celebrities all the time. However, after a few years actually doing PR work, they quickly discover it’s not all glitz and fun. 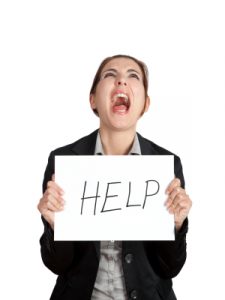 In fact there are several things that pop up during your time as a PR pro. Some things you can predict, like fussy clients. Others you really can’t prepare for until you’ve gone through it. Here are some of the strangest problems I’ve encountered over the years.

Do you love sleeping as much as I do? If you’re going into PR, it may be time to get used to a new schedule. One problem that’s popped up over the years isn’t just the long hours – it’s the odd hours.

For example, one time a client emailed desperately needing a change to a campaign we had been crafting for a month solid. They had just realized that the wording in the tweets and blogs might be taken the wrong way because of a recent local event. We had to scramble and figure everything out in time for their product launch.

When your client needs something, you answer. It doesn’t matter what time it is. You don’t realize the scope of this until you’re up at 4 AM trying to change 40 pre-scheduled Tweets.

I still find it strange that I get questions about Facebook and Twitter that actually make my head rock back. Just a few months ago someone wanted to know how to reach “everyone” on Twitter. These are the most commonly used social media platforms and people view them as mysterious as an episode of The X-Files.

As much as we know about PR and social media, it’s important to remember that not everyone knows how they work. In fact, that’s a huge part of why we’re paid the big bucks. We’re paid for our knowledge and experience, not so much as our talent and hard work. This confusion may be annoying at times, but it also keeps food on our tables.

Feel like you spend a lot of time goofing off on the web? Then you’re on your way to becoming a real PR pro! One of the toughest things I had to learn was that the Internet is vast and inviting, and the more time we spend on computers the more likely we’re going to get distracted.

It’s extra hard because we HAVE to be on the web. Either we’re doing research for a blog or reading news stories or posting stuff on social media for a client. Eventually we’re going to see something that catches our eye and off we go.

But that’s part of the job. And getting distracted once in a while is ok – it’s just when it becomes a habit and hurts the work then it’s a real issue. Try to make your distractions useful, at least; if you have to read a fun blog, make it one that will at least let you learn something about your industry or a well-written one so you’re learning as you have fun.

What’s the hardest thing you’ve found about being a PR pro?