A man walks up to a woman at a party and says, “I’m great in bed.” That’s marketing.

The man’s friend walks up to the woman at the party and says, “He’s great in bed.” That’s public relations. 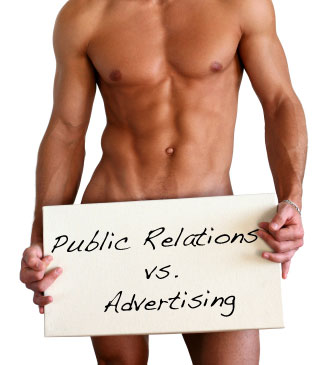 While the above scenario demonstrates the difference between marketing and PR in a nutshell, there’s a little more to it than that. According to the American Marketing Association, “Marketing is the process of planning and executing the conception, pricing, promotion, and distribution of ideas, goods, and services to create exchanges that satisfy individual and organizational goals.” In English, that basically means that everything a business does to become a success – from choosing products, to pricing, to market research, to advertising – is marketing.

When I think recent successful marketing campaigns, I think heavily bearded cavemen in Member’s Only Jackets.  In Geico’s commercial series, the Cavemen advertise insurance while simultaneously protesting Caveman discrimination in advertising. (How meta!) Of course, advertising is only one form of marketing, but the put-upon Cavemen are examples of a campaign that was thought up by the company and directly tailored for the consumer. Tacitly, the consumer understands that they are consuming a message sent directly from Geico. And that Geico is sending this message in order to win new customers and make the company more successful.

So Where Does Public Relations Come In?

Public relations is a little more complicated. While it’s easy to sidle up and tell your prospective party hookup how awesome you are in the sack, it takes a little effort to have disinterested parties tout the same message. Often, those disinterested parties are newspapers, magazines, television networks, and the general public.  When Exxon Mobile takes out a full page ad in the New York Times to tout how “green” they are, they’re marketing. If in the extremely unlikely event that Al Gore, a disinterested party in the success of Exxon Mobil, publicly stated that Exxon Mobile is a squeaky clean and environmentally green company, the move would be considered an excellent public relations coup.

And that’s the difference between marketing and public relations. Any questions?